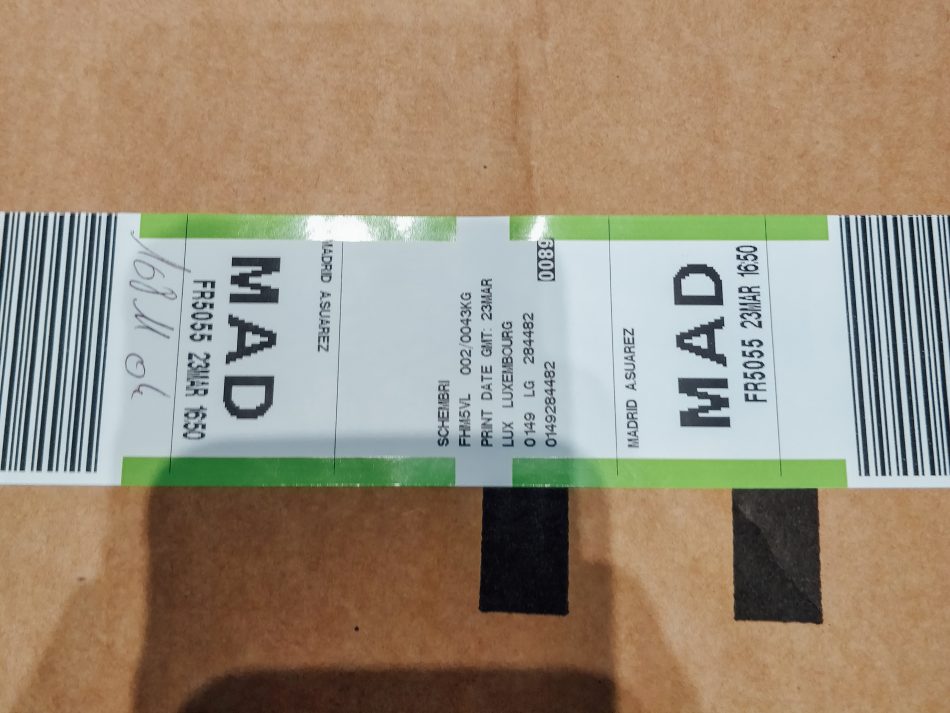 My baggage tags didn’t mince their words in describing me

If you’re interested in bikes in boxes, boy are you going to love reading this!

Getting from Luxembourg to Seville in the spring of 2018 was no walk in the park. Literally. There was some walking involved, but none of it was through parks. Also, I’m hilarious. With no regular direct flights available, I flew from Luxembourg to Madrid, from where I would then catch a high-speed AVE train to Seville. It looks simple enough on paper, but paper doesn’t quite tell you about the Great Trolley Drought in Madrid train stations and, consequently, how hard it is to push a heavy bike box along station floors, escalators and stairs while somehow also trying to carry a large shopping bag with your panniers in there (sidenote, the “red-white-blue bags” can be very useful to carry separate bags together and checking them into the hold, but the IKEA FRAKTA bag is even better).

Another fun fact I learned while planning my trip was that it’s much easier to transport a bike onto a Ryanair (!) flight than it is to take it onto an AVE train. Although it is indeed possible to take a bike box onto a train, the stated dimensions require the bike to have both wheels taken off, rather than just the front one as is the case with airlines. On any other bike, this would have been a minor niggle. Sure, I had to cut up the bike box I had left over from when I brought my mountain bike up from Malta to Luxembourg. But it was the wheels that were a problem: on my bike, this also entailed taking off the front and rear full length mudguards that had taken me weeks to get right – only to be putting them on back again in the hostel. But first, I had to get to the hostel, and as you can imagine, it was no piece of cake.

Here are the main lessons I learned while trying to get the train with my bike:

1) The random railway employees you ask about taking a bike onto the train are probably going to err on the side of caution or shrug you off. If there is no rule against taking a bike on board a train, then it’s safe to assume that you can take it on. Be persistent – particularly if you’ve done your research properly (and I had).

2) There are people in train stations who are only too happy to take the other end of your bike box and help you carry it along. The first person who helped me was a Spanish man; next was Steve, a young German man who was a cycle-tourist himself but who this time was in Madrid for business. Even in a box, the bike proved to be a conversation starter – and it wouldn’t be the end of it. Which is just as well, because I enjoy talking about bikes.

The restrictive dimensions for bikes aboard AVE trains look ridiculous on paper, but in practice the box takes up a lot of space in the luggage area. With The Box and myself off the train, I proceeded to push the bike out of Seville train station, thinking that once I would be cycling instead of pushing, everything would be much easier (you can see where this is going, it’s called foreshadowing and I’m using it as a tool to get you to read on, which benefits us both).

In the meantime, I took a taxi to the hostel. I have no idea how much I paid for it, but I remember being very grateful taxis existed at all.

In my naivité, I thought that I would get the bike rebuilt in a couple of hours on Saturday, leaving me free to explore Seville, one of my favourite Spanish cities, for the rest of the day. After having built the bike bolt by bolt, this should be child’s play.

From Seville to Santiago – R&R in Almadén

From Seville to Santiago – at the Black Swan

From Seville to Santiago – the rain in Spain