The Rubberbodies collective is no stranger to experimentation. Physical performances, gorgeous props and a medley of venues have been the group’s hallmark since its inception. Grandma, Temi and the Crimean Fever marks the groups first flirtation with science, solo performance… and words. IRA MELKONYAN tells David Schembri about the group’s new venture. 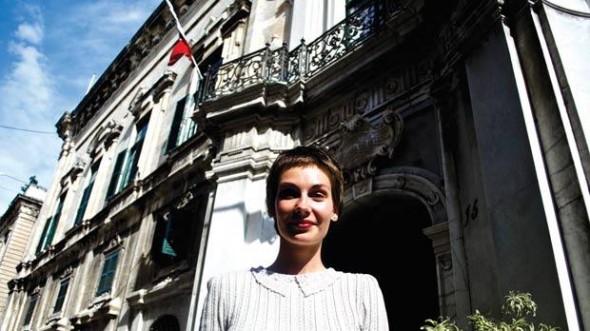 Over a hundred years ago, Ira Melkonyan’s great-grandmother Nina and her husband came to Malta for a year. Over a hundred years ago – in 1905, to be precise – Sir Temi Zammit discovered the Mediterranean strain of Brucellosis, known as the Maltese fever or the Crimean fever, among many other names.
Five years ago, a 20-year old Melkonyan, then finishing her master’s in microbiology in the Ukraine moved to Malta, where she has worked and performed since.
Grandma, Temi and the Crimean Fever is not your typical rubberbodies performance. It is built on storytelling, rather than the physical theatre of previous works. It is also a solo performance, casting Melkonyan into the spotlight as she draws audiences into how her family history and Maltese scientific history intertwine, in Palazzo Castellania, the Health Ministry’s home and very place where Sir Temi Zammit carried out his work.
“My idea was to join science and performance art,” Melkonyan says, “so we started putting things together, what my background is, the venue itself. We wanted to use the historical venue in the performance, and so it was obvious that Sir Temi would be one of the personalities within it.”
As the story was developed, Melkonyan began inserting parts of her family history into it. As the rest of the performance is based around storytelling, Melkonyan is reluctant to say much else. “I don’t want to give too much information, but there is some intertwining between the history of Malta’s science and my personal history,” she says.
The story will unfold as Melkonyan takes her audience around the building where Zammit’s legacy was sealed. “The story comes in as we walk around the building, it’s different from a classic presentation of a theatre performance where you come into the theatre sit down, and watch… this is going to be one where people walk through the building, see different locations and hear the narrative. My role in this performance is as a storyteller and tour leader,” she says.
“I am going to take the audience on a journey – both in terms of the story and the journey around the building. And we’ll also be following the journey Sir Temi and grandma were on,” Melkonyan says.
This work, she says is a “big departure” for her work within rubberbodies. “I’m so used to non-verbal theatre, and because our main focus is multidisciplinary, and because my main collaborator comes from a choreographic background, it was always a mixture of dance and theatre. This is something really new for us and our audience,” Melkonyan says.
This kind of work has an internal tension to it; although it is based on fact, it is, nonetheless, a creative work, and that entails creation, invention, drama.
“It’s a piece of art, so it’s not the history I’m narrating; it’s partly historical truth and partly invented stories that intertwine, and I guess the exciting, or maybe challenging, part of it would be to discover what is true and what is not. Some people might decide not to, and just go for this experience. It’s performance at the end of the day – which is based on facts, scientific facts, but there should be some creative element in it as well,” Melkonyan says.
“There is a trend in contemporary performance art called the fictional tour, it’s when a performer is giving a tour based on facts, some of which are invented or changed in order to serve a particular aim that the performance has to transmit to the audience,” she says.
“From what I gather, it creates different kinds of responses within the audience, some will go ‘is this person telling the truth, can I believe him, can I not?’ – it obviously creates some kind of tension,” Melkonyan says.
“I think ours will be very entertaining as well,” she says, tentatively, quickly adding: “I don’t like using this word towards art, but the narrative is being structured to give a good, positive feel”.
“The whole idea is to see how it all intertwines. Whether you want to distil it into truth and invention or take it just as it is.”
What is true is that Temi Zammit was an extraordinary character. A medical doctor by training Zammit specialised in bacteriology and eventually discovered that Brucellosis was transmitted through unpasteurised milk. However he is also known as an archaeologist as well as a writer – a true polymath.
Melkonyan has no pretensions of being a polymath, however she has only recently come to term with accepting her dual interests of science and art.
“These were two parallel lines in my life, and it was always a struggle how to combine these two. It was more like ‘Ira you have to choose, you are either a scientist or an actress!’ and I was always like ‘I don’t want to abandon any of them, what do I do?’”
She eventually reconciled this tension after attending the European College of Liberal Arts in Berlin. “I realised that the two can be combined, that things can be multidisciplinary, and you can’t only do chemistry and biology or theatre and dance, but you can do theatre and biology together”.
This is her first attempt at combining the two, and although the performance is underpinned by the concept of the medicalisation of society, this is just the start of what she hopes will be work that further integrates her two passions.

The research that came in handy was that which she carried out on her family history. When she was 12, she set about building her family tree, trying to find out information about her cousins, great-cousins, grandparents, and with each name she would hear their stories.
One of these stories was that of her great-grandmother Nina – the “grandma” in the performance – who came to Malta at the turn of the last century with her husband, who was a doctor. She too had a keen interest in medicine and biology, a fact which Melkonyan makes her feel closer to her. The other relative she feels she can relate to is her grandfather, who was a chemist.
“I never met him, he died when my father was 15. That’s another person in my family that I relate to, he had published some papers and did some engineering. The way my grandma describes the way his mind worked is something I can relate to.”
“I feel I can relate to the image I’ve built of my great-grandmother,” she says.
She is aware that the story of her grandmother is not immune to error.
“I remember my grandmother was quite a good storyteller as well, and at some points I wasn’t sure what she was inventing and what she’s not, but then that’s my only source of information, so in a way I chose something and decided, OK, this will be truth, this will be something I will believe. Of course there is a way of going into archives, and that’s how I know my family history. For me, it’s the truth, but then how can I certify that this is 100 per cent truth? I guess that’s the question of history in general, no?”

Originally published on The Sunday Times of Malta.