Designer JONN GALEA never expected his Tube Map of Malta to provoke such a diverse set of reactions, he tells David Schembri. 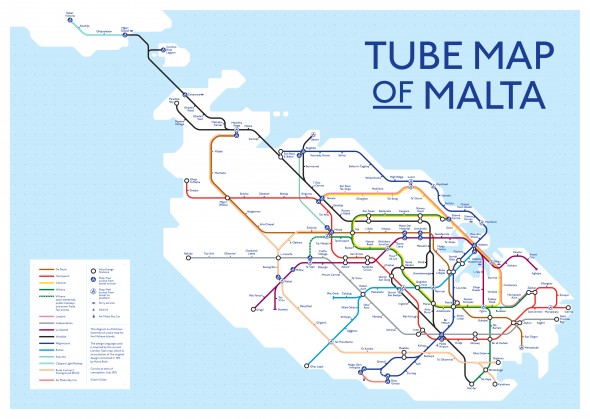 In the early 1930s, an electrical draughtsman called Harry Beck spent his downtime working on a map of the London Underground. In 1932, a tentative batch of 500 small leaflets with the map was produced. The next print run, in 1933, produced 700,000 copies of his design.

Beck’s simple, iconic design is immediately recognisable, and still forms the basis upon which the current Transport for London tube maps are based on.

Like Beck, London-based Maltese designer Jonn Galea was working on a map in his spare time – only this time, his home country was at the background of the coloured lines synonymous with the Tube map – and the result is immediately recognisable.

“I wanted to create a piece that would communicate the relationship between Malta and London and have bit of fun at the same time.  The Tube Map schematic is an iconic piece of design that is synonymous with London, so I used its design language as inspiration, and imagined how the system would look like if it had been created on the Maltese Islands,” the designer says.

Galea’s London commute is mainly on the Jubilee line; on his own Maltese tube line, which uses the same amount of lines as its London inspiration, Galea would probably take the Vilhena line from Birżebbuġa, then changing onto either the Cotoner or La Valette at Fgura to get to the Gżira and Sliema area.

Despite having his itinerary mapped out, he is quick to point out, that it was always “just a bit of fun” and “very tongue-in-cheek”, and a piece of social commentary on “the ever-worsening traffic congestion in Malta and the general dissatisfaction with the public transport system”.

Tongue-in-cheek as it may be, Galea’s map points to a system which might alleviate some of the country’s transport woes while simultaneously sending it into financial ruin because of its many lines, some of which lead to Baħrija or the Blue Grotto.

“Is it a good idea? Definitely. Is it financially viable? I doubt it,” Galea says.

“I’m no civil engineer, so what I designed should not be taken as a serious proposal. If an underground system were to be constructed in Malta, it would not need to be as complex as the one I’ve depicted – three, maybe four lines tops – but even that would cost many billions.”

Although there was no civil engineering involved, Galea had to do a fair bit of research to get to his final draft, first studying the elements of the Tube Map, then studying various maps of Malta to see how the two fit together –“I discovered things about Malta’s geography that I never even knew existed, despite having lived there for most of life.”

He then worked on printouts of the Maltese map, only after which he started work on his computer, from where he sent his design into the world.

Once Galea’s artwork hit the web, he was faced with two of the problems artists face nowadays – non-attribution and downright misinterpretation. Doesn’t he regret not sticking a large “Made by Jonn Galea” watermark in the middle of his design?

“I never expected the piece to go viral so I didn’t really feel the need to overly protect the work, so I just put my name on it in the same way I usually do. It is annoying that many popular Maltese Facebook groups decided to not credit my work and post poor quality screen shots of it. The initial excitement I got from it going viral was soured to a degree,” Galea says.

“The artwork has also regularly been used out of context. More often than not, the chatter was politically charged, and that upset me. My motivations for creating the piece could not be further away from that realm. But ultimately I don’t regret not putting a huge watermark on the piece, I am designer in the end and doing so would have defiled it.”

Galea is planning a limited-edition run of prints of the map, and isn’t really worried about people stealing his design to put on souvenir T-shirts – more curious, if anything.

“It’s not something I can control so no use worrying about it. I’m not saying that I’d take it lying down, but I’d buy a few examples before making a few calls.”

What Galea’s map and the online reaction to it have proven, if anything, is that good design stands the test of time. While the Tube map changed during Beck’s lifetime – his last printed contribution was in 1960 – today’s map bears a legend saying “This diagram is an evolution of the original design conceived in 1931 by Harry Beck”. Beck’s work is exhibited in the London Transport Museum, and his birthplace in Leyton, East London, was this year marked with a blue plaque, 80 years after the publication of his map.

The Tube Map is no stranger in the art world.

Simon Patterson’s 1992 work The Great Bear – now part of the Tate collection – takes the tube map and changes the station names to names of saints, philosophers, footballers, writers and so on. Last year, Tracy Emin’s reinterpretation of the Northern Line as a tree branch was on the cover of the map booklets handed out to commuters, while the Google logo spelt out by tube lines in commemoration of the Tube’s 150th anniversary was immediately recognisable as a tribute to Beck’s original design.

“Iconic design stands the test of time and The London Tube map still adheres to the design rules laid down by Harry Beck in 1931,” Galea says.

“Why is it still successful? I would say that is due to its revolutionary grid, an emphasis on simplicity, and a design direction based on communication above the aesthetic, which still manages to be pleasing on the eye.”

This article originally appeared on The Sunday Times of Malta of August 4, 2013.