Slava Popov’s mission in life is to put people in awe and wonder at what the human body is capable of. The acrobat and circus performer speaks to David Schembri ahead of ĊirkuMalta’s debut at the Malta Arts Festival.
If you think you have a tough job, spare a thought for Slava Popov. This 31-year-old man spends most of his time at the office upside down, oftentimes only supported by just the one hand. 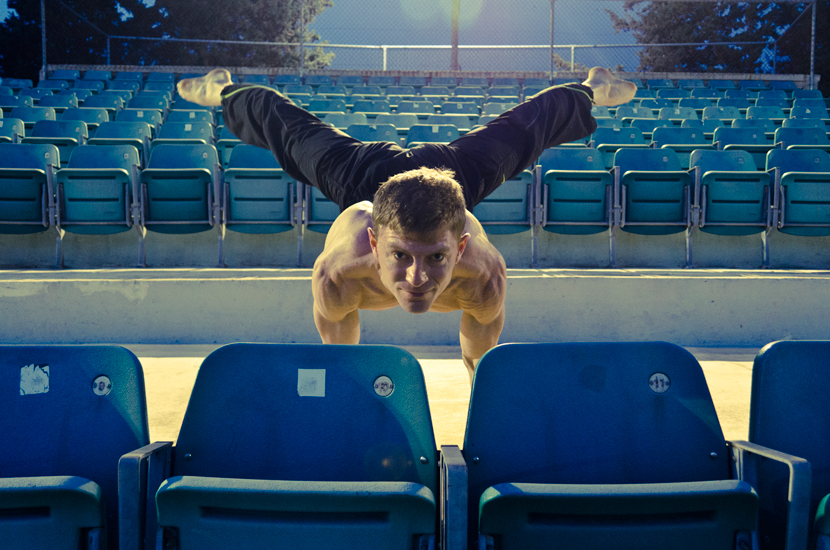 Luckily for him, being Russian acrobatics champion twice helps. The fact that his current office is, upon closer inspection, a circus, should clear any confusion. The circus in question is the ĊirkuMalta production Darirari, a project specifically commissioned for this year’s Malta Arts Festival.

“Malta has always attracted me, and when I saw the online call for performers, I immediately wanted to be part of the project,” Popov says.
A couple of Skype meetings and a flight from Switzerland (where he has last performed) later, and the Russian acrobat is waiting for the troupe’s first rehearsal to start at Ta’ Qali National Park, where the circus will be based for its three-day run at the festival.

A glance at his CV should explain how he got the job. Now a freelance solo performer, Popov started his circus career with the Cirque du Soleil after being approached to attend its formation programme in Montreal, Canada, and was later asked to join its Orlando show, La Nouba.

While at Cirque du Soleil, the athlete learnt acting, singing, drumming and other things to see where his talents lay.
“The singing wasn’t my strongest part,” he admits. It was the drama component, however, which he believes transformed him into what he is today.
“Drama enables you to become freer in your mind and to use your body more; it enables you to transmit feelings. On its own, performing tricks can be a bit cold; you need to put the audience inside what you transform through your body,” the performer says.

When he was called to join the circus just after having won his last Russian championship, it was a “dream come true” for him, and within two weeks he was in Orlando, Florida, where he was part of an act with another 18 people.

After two years at La Nouba, he joined one of the Cirque’s touring shows, Dralion, which took him across Europe and to Japan, where he performed to a million people in the space of a year, making it the most successful Cirque du Soleil show to hit the country.

The acrobat, however, was used to solo performances and the glimmer of the podium. At the Cirque he was being increasingly dissatisfied at the loss of his individuality within the machine, and after touring the world with another show, he left the company and went solo.

“I wanted to try something new and see what else I could push my body to do. Cirque du Soleil couldn’t offer me a solo place, so I left,” Popov says.
This ties in with the reason he performs, as his aim in shows is to show people just how much the human body can do. The other reason he left Cirque du Soleil is that there wasn’t much space for interaction with his audiences.
As part of an immaculately co-ordinated spectacle, there wasn’t much space for his character to shine through – something he understands – but he laments the lack of opportunity for him to interact directly with people outside the show.

“You perform 10 shows a week, but only the solo acts interact with the media – and only seldom. Everyone else turns up for work and goes back home. For example, in Japan – it never happened in other countries, somehow – people waited outside for our autographs and for a chat. In this way artists got this feedback, and we were re-energised. It’s a good feeling,” Popov says.

He should not be disappointed by Maltese audiences, who are usually very receptive to foreign talent – and is also looking forward to collaborating with new people, which is one of the most enriching aspects of his freelance status.

It is this interaction which is also fuelling his next venture, a Health House, where guests would have a nutrition plan drawn up by the acrobat himself and would have yoga and fitness lessons in a relaxing atmosphere.

He couldn’t be a better advert for his methods than he is, but the perfectly chiselled muscles and anatomy-defying moves have a price – a “minimum” of three hours of physical training every day and a very strict diet that is mostly vegetarian and tuned to his specific needs.

The artistic side of Popov’s work also requires time and this adds yet another two hours to his daily preparation – excluding rehearsals.

In fact, event producer Sean Buhagiar notes that rehearsal times have been set at rather late times so that the performers’ different lifestyles could be accommodated – and he admits that the team is still learning how it’s done.

The risk of injury is also very real, and there have been times where Popov could not work because of an injury – but most times he just works through the minor injuries. He does manage to minimise risks by attempting new moves in incremental steps, and will only perform after having warmed up properly.

But despite his work involving lots of handstands, Popov remains grounded and is grateful to his young family (he has just had a son with his wife) and to his coaches for getting him where he is today – at the initial stages of a fledgling circus on a sunny Mediterranean island.