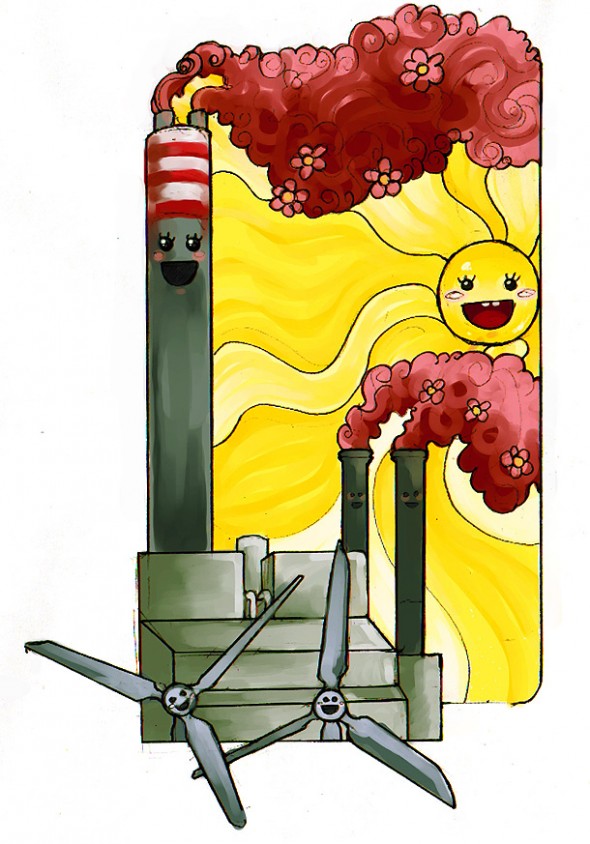 Ever since the luminaries of global and local politics have latched on to the predicament our planet is destined to, i.e. that the Big Oil Tank Underground is soon going to empty, ergo we’ll have to start using crops to make fuel, thus making food more and more expensive, in turn making us have to resort to either: a) walking around barefoot instead of driving around (nylon/polyester/rubber – all oil derivatives); b) resorting to alternative energy; c) cannibalism, hence ending all hope for the human race.

We’ve been hearing a whole new vocabulary creep in. Whereas a couple of years ago, the word ‘green’ was the name of a colour, and ‘sustainability’ was a quality mostly desired by guitarists in their guitars, these words have now violently entered PRspeak, and anything worth wanting, buying or making has to be ‘green’ and ‘sustainable’.

Take a look at Apple, for example. After pressure from Greenpeace, Apple are trying to sell their products on the basis of their greenness, which basically means that once your iPod/laptop/whateverelsethey’redoingthesedays stops working and you have to trash it (because fixing things is passé), it won’t harm the environment as much as another computer. Another ironic (only recycled iron being used here) situation occurred as I was watching ‘Pimp My Ride’: since California is trying to be ‘greener’ in its approach, Governator Arnold Schwarzenneger came on to give us a nice talk on how important it is to safeguard the environment. I was half expecting the team to turn the car in question into a bicycle or a solar car, until they chucked in a six-litre engine from a truck – an engine which is six times bigger than my car’s – and which somehow does less harm to mother earth than my 1.1 litre rustbucket, because it runs on biofuels.

Malta hasn’t shied away from this new trend, either.

In the name of the environment, we have to pay more taxes on things which run on electricity, money which presumably goes to produce another run of environmentally-friendly ‘David Ra D-Dawl fil-Garaxx’ campaign. We also have to pay more taxes on older cars because, let’s face it, the factories building new cars only leave a whiff of fresh air during the manufacturing process. How about using an electric car? All fine, if you want to have a nice whirring sound while you drive and don’t mind waiting the odd eight hours while filling up from the Delimara Power Station, which, last time I checked, wasn’t working with sunshine and windmills.

But cynicism aside, there is another worrisome issue, which has been looming over the horizon.

Just by looking at the 2009 budget speech, we find over forty instances of the word ‘sostenibbli‘ and its variants, while things you’d expect to find in a budget such as ‘ekononomija‘ and ‘flus‘ only figure modestly, with thirty-five and six appearances respectively. Every speech I hear, the word gets used, and everyone is keen to explain the word to us as if they’ve just discovered it in a dictionary. So we get the usual mantra:

Stipends – they seem to be sustainable, for the time being.

Jobs – we need to make those sustainable.

Sustainable is being sustained and placed into all kinds of places deemed sustainable while we sustainably ignore the harsh truth: using the word ‘sustainable’ is no longer sustainable. We need a new word. How about sustainababble?

This article originally appeared in The Insiter, sometime in 2009.

Illustration by Daniela Attard, aka Iella.

Can we fix it?