Agatha Christie’s The Mousetrap is exploding out in 60 countries to celebrate as many years of its existence. David Schembri speaks to Sue Scantlebury, the only actress to have been in The Mousetrap’s original West End run and a 60th anniversary performance. 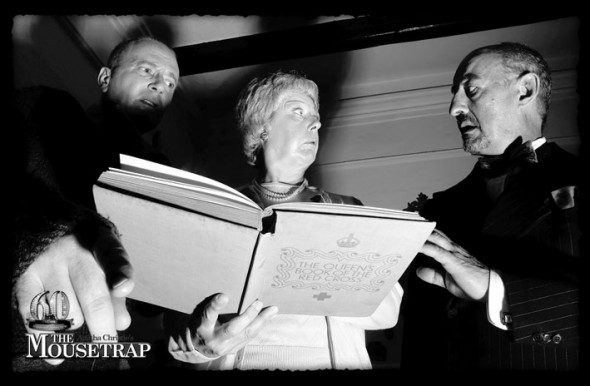 You never step into the same river twice, Greek philosopher Heraclitus said. This 2,500-year-old aphorism was not a scientific observation on the crocodile-infested rivers of Greece, but rather the observation that things we perceive to be unchanged are constantly changing.

Which is precisely what is happening with The Mousetrap, first staged in London’s West End in 1952 and is still being staged to this day.

Its longevity has been such that it has turned into a tourist attraction for that very reason, which, in turn, only contributed to its sojourn.

To maintain the London streak, the play was only licensed for one theatre outside of the West End a year, making it very hard to see it anywhere outside of the now legendary St Martin’s Theatre.

The play was only licensed for one theatre outside of the West End a year, making it very hard to see it anywhere outside of the now legendary St Martin’s Theatre
This year, things are different, and 60 theatre companies across the world are putting up their own performance of Agatha Christie’s play, with MADC in Malta being the only amateur dramatic troupe to do so.

Sue Scantlebury, who now lives in Gozo, was an understudy for Mrs Boyle’s part at the St Martin’s Theatre between November 2005 and July 2006, and will be reprising the role here at the Manoel Theatre.

“I was an actor new to the scene, and such actors often take an understudy role or two in the early years of building their career. It is good discipline. You learn a lot about the business. It is frustrating at the same time. No actor wants to understudy; they want to be acting,” Scantlebury says.

Now she’s relishing the elbow room she didn’t get the first time round: “It will be good to have the part develop organically in me through the rehearsal process, rather than simply having to copy exactly what the actor you are understudying is doing. It has to be exact or it runs the risk of throwing the rest of the cast off their game,” she stresses.

With the lead to her understudy being remarkably hardy, Scantlebury notched three appearances at the West End show – half of what she is expected to do in the two-weekend run of the play at the Manoel.

“The three times I did appear, the main cast said they really enjoyed it, as they had to ‘up their game’ to cope with someone new on stage,” she says.

The Mousetrap is – in Agatha Christie-style – a murder mystery, and Scantlebury plays the role of Mrs Boyle, the widow of a wealthy, middle-class, professional man.

“She has no children and no friends. She has sold her house and has chosen to live as a guest in various guest houses and hotels, moving around from one to another, forever hoping she will find congenial company and be looked after in the way she was once accustomed to in the days when she had servants.

Her loneliness and her fear that things will not be right and proper make her very bad-tempered and cantankerous. Like any human being, she is vulnerable and, really, only wants love and acceptance, but she simply does not have a clue how to go about acquiring them and everyone ends up hating her,” Scantlebury says of her character.

Like The Mousetrap’s West End run, Scantlebury’s love for the theatre has been long-standing. However, it was only relatively recently that she took the plunge to do it professionally.

“I have always wanted to be a performer and I performed on stage whenever I could from the age of six. However, because in my teens I was terribly lacking in self-confidence and surrounded by people in Rochdale Youth Theatre Workshop who appeared to me to be so much better than I was (including Victoria Wood!), it never occurred to me to actually pursue it as a career, so I studied English at university, became a teacher and administrator and kept acting as a hobby, staying an amateur actor and director well into my late 40s,” Scantlebury says.

In the end, it was a personal crisis that pushed her to turn professional. “I no longer wanted to teach; my younger son was leaving for university and my husband was working away from home. At this very same moment, I became aware through a friend, whose daughter was at drama school, that they took older people like me. I finally felt able to go for it, just to see if I could actually do it.”

Her family sold the house in Yorkshire and moved near London, where her husband was working, and she started applying for drama schools.

“Four auditions, two recalls, and one offer later, I entered drama school at the grand old age of 50. It was the very best year of my life and I am still, 10 years on, in touch with the 11 others I trained with, the oldest of whom, at the time, was 27!”

Scantlebury will be bringing her talent, training and the character she studied for 10 months to the Manoel’s stage, where she will be joining Jo Caruana, Manuel Cauchi, Malcolm Galea, Stefan Cachia Zammit, Jean-Marc Cafà, Chiara Hyzler and Toby von Brockdorff, under the direction of Polly March.

Agatha Christie’s The Mousetrap is on at the Manoel Theatre from Friday to next Sunday and October 25-27.

This article originally appeared on The Sunday Times of Malta of October 13, 2013