Having burst to stardom on the Woodstock stage in 1969, Carlos Santana is one of the longest-serving rock stars in circulation. He tells David Schembri he still enjoys playing. 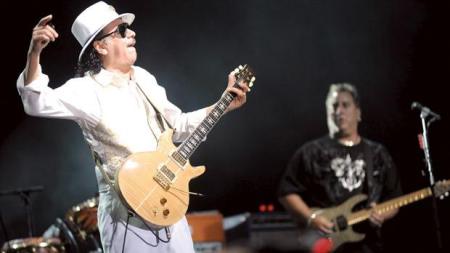 Speaking on the phone, Santana’s voice, much like his guitar sound and the title of his 1999 smash hit, is smooth.

“Hi, this is Carlos,” the unassuming Mexican-American guitarist says.

For the multi-platinum and multi-Grammy artiste, it is all about conversations. “(Music is) like a conversation with a part of you and me that is pure, very sacred. You elevate yourself to a place where you’re not in misery, in fear or lack of self-worth or being criticised all the time, or putting yourself down.

“And you get into a place like children,;children have a way of being very up, of being very willing to look at life like fun, so it should be fun,” Santana tells The Sunday Times.

The guitarist is currently on a world tour promoting his latest album, Guitar Heaven, where Santana covers guitar-driven songs like Led Zeppelin’s Whole Lotta Love, Deep Purple’s Smoke on the Water and the Red Hot Chilli Peppers’ Under the Bridge.

“Those songs… whether it’s George Gershwin or The Beatles, they’re good songs and I wanted to have fun, and of course fun can only be once you get past fear,” the guitarist says.

Santana’s latest record is but the last in a career which encompasses 21 studio albums, 21 compilations, seven live albums and innumerable collaborations with other artists’ work. Santana played the 1969 Woodstock festival, before his debut album was released, and he has never stopped. How did he manage to stick around for so long?

“Thinking good thoughts, staying inspired, listening to the right music, music that elevates you. Do not think twisted, because when you think twisted you get tired, you get angry, you get bitter, and before you know it everything feels like dead sand. If you want to stay inspired and uplifted you have to monitor what you’re thinking as much as possible,” Santana says.

After his glory days in the 1970s, which spawned classics such as Black Magic Woman and Oye Como Va, Santana’s career took a bit of a dip, reaching a nadir in the 1990s when he ended up with no recording contract.

But the best was yet to come. The moustachioed Mexican came back with guns blazing with his 1999 album Supernatural, which started a series of collaborations with various singers and bands.

Successive albums have seen him share the studio with a variety of musicians, from soft rock songstress Michelle Branch to grunge crooner Chris Cornell – and he wants more.

“I’d love to do something with Sting, Prince, Lady Gaga or Andrea Bocelli. But mainly I’d like to do some things with African musicians,” Santana says.

Speaking of his upcoming concert at the Granaries on July 24, he assures fans that all bases will be covered: “We’ll be playing everything: yesterday, today and tomorrow – we play close to three hours,” Santana says.

Emotions run high during his shows, but the atmosphere on stage a year ago during a show in Illinois, the US, transcended music.

Four songs into a concert at Tinley Park, Illinois, Santana popped the question to his drummer Cindy Blackman after a drum solo, and the pair got married in December last year. How is that working out?

Asked what gives him his unmistakable tone (Santana uses PRS guitars, Mesa Boogie and Dumble amplifiers, some of the best-regarded names in the business), the guitarist shies away from the technical talk most guitarists are prone to indulge in.

“Well, it’s a triangle between God, my mother and my father. The gift to play the guitar comes from elsewhere, you can practice but you can’t just get that sound, that sound comes from within your heart,” the guitarist says, inviting young musicians to “learn to feel your heart”.

He also has a message for the Maltese audience: “You’re significant, you’re meaningful and you can make a difference in the world by creating little miracles of joy, thank you so much.”

And finally, after 40 years on the stage, does the hard-working musician still have fun playing concerts?

“Yes. I have a lot of fun on the road, thanks for asking.”