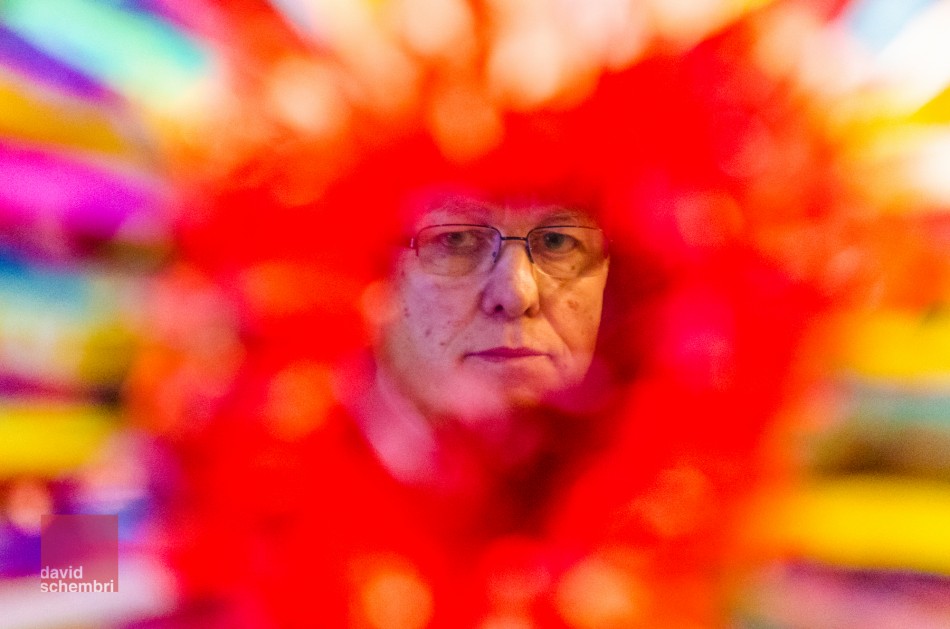 Artist Raymond Pitrè reflected in one of his works Photo: David Schembri

An architect and the head of a mental hospital are touring the hospital, and they come across a room, in the middle of which is a big, beautiful boat. A small man appeared from behind it. “Did you make this?” the architect asked. The man nodded. “What did you do it for?” “For the flood,” came the answer.

“That is pure madness,” says Ray Pitrè, who first heard the tale from the architect, who gave him private lessons, in 1958. “But what I’m doing isn’t too far off from that. A madman will create a perfect piece, but then they won’t know what they’re going to do with it.”

Pitrè is speaking at Palazzo Depiro, where the 10 works that make up his current exhibition, Documentary, are being shown. The works are multi-layered, three dimensional compositions made of paper and paint over a mirrored frame, and are the fruition of an idea he had started working on in the sixties, in his cramped studio on New Street, Sliema.

That batch of work, done on polythene, he says, had been ruined by “someone in theatre” to whom he had lent them. “He’s a cannibal!” he says of him. “You’d give him your hand, and he’d devour it, and you with it. He’s my friend, but I don’t trust him” the 73-year-old artist, clean-shaven, upright as the days in which he served as a policeman, says.

His distrust of outsiders is evident when he speaks of other artists. “This work is completely new in modern art, on an international level,” he says. But he is happy with the isolation Malta affords him from the rest of the art world.

“I’m scared of foreigners, because I know they steal ideas, as they’ve already done. In 1999, I exhibited at the Vienna biennale. I know of two or three ideas which were stolen by famous artists. But when a famous artist steals your idea, he’ll take the credit, not you. That’s the way the cookie crumbles,” Pitrè says.

Over the years, this project was derailed, until his studio became host to his daughter and her husband’s furniture, which meant he could not work there. It was around that time that Gozitan artist John Paul Azzopardi started visiting Pitrè at his house and served as a catalyst for Pitrè to create a website and get to work on exhibiting these pieces, helping him to whittle down the 60 works to the 10 being exhibited.

With the help of his assistant, Monique Fenech, and her husband Edward Fenech, Pitrè directed these artworks, which appear to have been on his conscience for a long time.

“It’s a very complex thing – I can’t explain it. If I were to ask myself, I wouldn’t know.

A madman will create a perfect piece, but then they won’t know what they’re going to do with it

“I’m concentrated on my work. I’ve just told Monique as she drove me here, that I’d rather travel and stay here and work and be thrown into a box once I’m dead, than travel while this work is waiting for me, like a sick patient I’d neglected,” he says.

These works are inspired by Hindu temples he had seen pictures of in his youth; when he was 14 or 15, he used to make sketches inspired by these, only to have them torn up by his mother. “I’ve been through the mill,” Pitrè says of this; “I’ve been on antidepressants for over 50 years.  It’s hard to have a certain calibre of work and mind and not suffer from these things.”

The works, he says, are designed “to attack the retina” in one go, with all the layers, reflections, colours and sheer work impacting the viewer at one go, like a pyramid or a temple. “If it doesn’t surprise you, it’s not art. It’s like having sex without reaching an orgasm. What’s the point?”

His works are unlike a book, where the artist’s sacrifice is revealed page by page. So central is the three-dimensionality of the work that he is upset by the photographs that make up the  exhibition book, which focus in on details of the works, leaving out the mirror framing, which is common to all of these works. 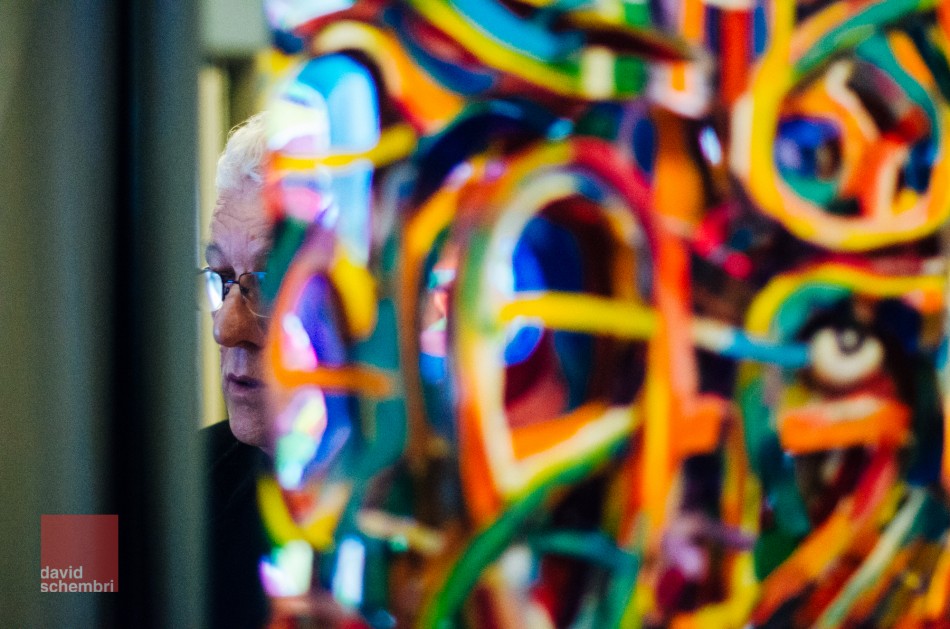 Artist Raymond Pitrè reflected in one of his works Photo: David Schembri

Rather than painting, he sees the process behind these works as being more of an architectural one, and he likens his role in the works as the architect, with Monique executing the vision and Edward making the wooden and mirror backings for the picture.

“It’s a documentary, because when you look at me, you look at everything. You see people walking past… they all stick into your head. We are documenting form the first instance of our life,” Pitrè says. “When you shave in the morning, the mirror is documenting you.”

Pitrè’s mirror backings were inspired by the silvered packaging of Panadol.

“An idea has to come from somewhere,” he says. But the whole thing has nothing to do with anything. You catch loose ends; you glue them together into one entity. It’s very transcendental, spiritual”.

“You can look at the work and say, is this a carnival? This is no carnival, at all.” Rather, he says, it is a counteraction to his previous work which was “very dark, full of depression and desperation.”

“This expresses an inexplicable euphoria which I feel, which is not connected to anything.”

Ultimately, Pitrè’s latest exhibition is an attempt for him to retain his sanity. “I think in the history of art, the most famous madman of all was Van Gogh. You ask yourself, all this coloured work, is it the work of a madman?” the artist asks “But then you have to define things. It was said of him that he wasn’t mad – it was society that maddened him. Everyone is in his own hell, and to get out of your hell you have to express yourself,” Pitrè says. “And this is that.”

Raymond Pitrè’s exhibition Documentary is running at Palazzo Depiro until the end of March. It has been supported by the Malta Arts Fund.

An edited version of this article appeared on The Sunday Times of Malta.